A depleted South east and East side had their work cut out to keep their unbeaten record when they travelled to Coventry to face a full strength Midlands team.

The SE&E had Ben Harvey making his series debut, while the Brinkhoff brothers doubled up after racing 6 rides each in the junior event. The Midlands called upon home track specialist Myke Grimes, along with stars Chris Timms, Paul Heard and Ricki Johnson to spearhead their attack.

Heat 1 went to Josh Brooke, riding at tactical reserve, ahead of GB team mate Paul Heard. Timms/Johnson scored a 6-4 in heat 2, before Grimes sheparded home his team mate for a 5-5 in heat 3. Heard/Groves scored another 6-4 but the SE&E hit back in heat 6 with their own 6-4, the Hill brothers relegating Heard to the back.

Young Lewis Brinkhoff got in the thick of the action in heat 8, fending off a last bend charge from an out of sorts Timms to follow partner Brooke home for a 5-5, heat 9 also ending in a shared heat to leave the scores 46-44 at the interval.

Heat 10 was a disaster for the Midlands, first Jewkes excluded for moving under orders, before Rycharski fell when under minimal pressure bringing down Mower in the process, leaving him and partner Brooke to complete a single lap and put the SE&E 5 points ahead.

The Midlands hit straight back and reeled of 7-3, 6-4, 7-3s in successive heats, Timms and Heard featuring, to wrestle back control and give themselves a 5 point lead.

The SE&E weren’t done yet though, Brooke/Hill punishing some lax gating from the pairing of Timms/Groves, bringing home a maximum heat advantage from the outside grids, before cool head Lewis Osborne headed home an East 6-4 to put themselves back in the lead by a point. 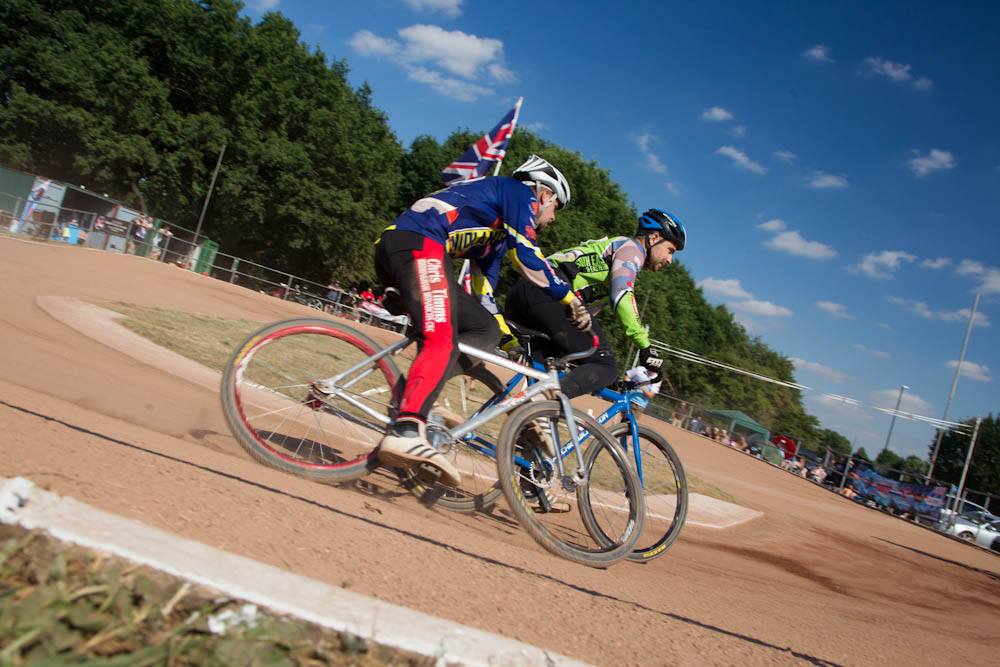 Heat 17 and the Midlands were handed the initiative when Matt Hill moved under orders, giving them a 6-3 heat advantage, before Ricki Johnson returned the favour, gifting the East their own 6-3 and their 1 point advantage back.

Heat 19 saw Matt Hill and Brooke line up off the inside against Heard and Rycharski. After a pile up on the first time of asking, Brooke gated round Heard to race away for the win, but with Rycharski coming through for second, a 6-4 heat advantage gave the South a 3 point lead, meaning the Midlands could still sneak the win.

And they came to within a tyres width of the win as heat 20 produced one of the most dramatic finishes to a match you will ever see. Myke Grimes rounded Lewis Osborne from grid 3 to hit the front, with team partner Johnson in 2nd, but as he slowed to let his partner round, this gave Ash Hill enough time to drive up the inside, causing the Coventry man to fall.

Incredibly, Grimes remounted his bike, quick as a flash, making his way past Osborne on the first straight, before pulling a line on Hill coming out of the 2nd bend on the last lap, heading down the back straight neck and neck, the Midlands man made the pass stick, but as he picked up, Osborne dropped underneath coming off the 4th bend, both riders just making a frantic dash for the line.

Both teams and supporters watched as they waited for referee Bob Prince to indicate the winner, and as he gestured to the inside, the SE&E were left to celebrate, knowing they’d produced one of the best team performances this league has probably seen to date.

The Midlands will be wondering how they were unable to take advantage of a weakened side, seemingly able to get their noses in front, they were never able to deliver the decisive blow and really rack up some heat wins. With the league now impossible to win, they will be looking to finish the season strongly, and have one eye on next year.

For the SE&E it means they are now only 1 win away from retaining the title they won last year, this time in much more convincing fashion, and with riders like Tyler Brinkhoff, and younger brother Lewis who score a credible 11+1 on his series debut at the age of just 15, it would be hard to bet against the East adding more titles in the near future.

It was more of the same in the elite junior class, with the young South East and East riders also winning a last heat decider by one point.

Without England star Pierce Bacon, the SE&E juniors all rose to the occasion in style, despite being behind for most of the meeting.

The Midlands led 48-41 at the interval after repeatedly showing their track knowledge with passes splitting Eastern pairs on the third bend, the SE&E’s only heat advantage was 7-3 from Owen Wells and Harrison Bacon.

The second half was tighter and a number of exclusions and mistakes costing the Midlanders. 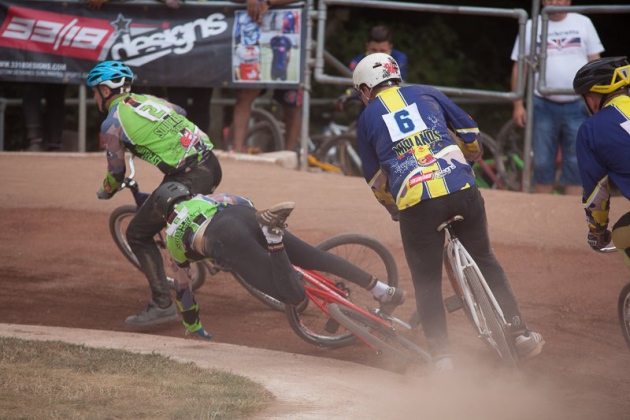 Adam Cooper and Bacon put the East ahead 88-85 going in to the nominated heats but a disastrous 3-7 heat against Bacon and Ben Clarke put the home team a point up with one to go.

But in a thrilling climax the Brinkhoff brothers, Tyler and Lewis produced a brave ride, Tyler holding Jimmy Wassall at the back while younger brother Lewis showing all his class, twice passing Junior Great Britain racer Ewan Hancox, as the celebrations began for the SE&E youngsters. 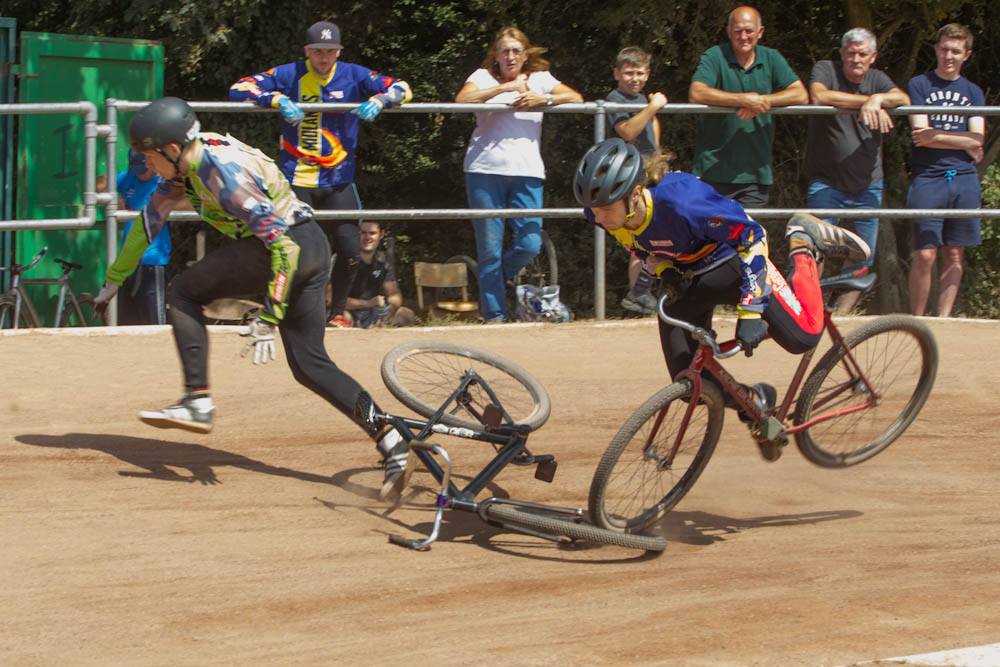 The elite junior class has been spectacular. Photo by Paul Devine.

The Supertrax Battle of Britain series has gone from strength to strength so far this season as more top riders turn out for their prospective regions and matches like Sunday’s prove what a fine spectacle each match could be with the best of the regions going wheel to wheel, with the added bonus of the elite junior class offering young riders who would be without elite racing otherwise and can only strengthen the sport in the future, especially at international level.

Thanks to Josh Brooke and Mike Bacon for the reports.

What is Cycle Speedway?

Help with the running costs of the 3318news.com.

Got some news to share or a match report?

Send it across to: newsroom@3318news.co.uk
A member of our team will upload it ASAP.

By continuing to use the site, you agree to the use of cookies. more information